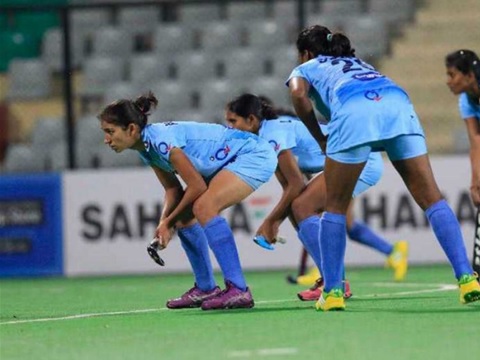 Thirty-six years after they last walked on an Olympic pitch, the Indian women’s hockey team took on Japan on Sunday in the opening match of their 2016 Rio Olympic Hockey. Keeping with the occasion, they made a spirited comeback after being 0-2 down to draw 2-2.

India were distinctly unlucky in not earning full points; in the last minute, a hard shot by Vandana Katariya was saved by the Japanese goalkeeper Asano Sakiyo.

Japan scored in the first two quarters through Emi Nishikori (14) and Mie Nakashima (27). India made a comeback after the break, getting both the goals in the third quarter through Rani Rampal (30) and Lilima Minz (39). With the draw, both teams now have a point each.

India’s women team marked their first Olympic appearance in 36 years with a 2-2 draw.

The draw would be hugely satisfying for the Indians, for no team wants to losing its opening Olympic Hockey. But they did play some extremely loose hockey in the first two quarters. Perhaps nervousness crept in, as they were playing their first Olympics match in 36 years. But Preeti Dubey had two weak shots after having the ball in the circle. Even Poonam Rani, who had a good match, couldn’t strike the ball powerfully enough to stretch the Japanese goalkeeper. Rani Rampal also had a look at goal, but delayed.

So when Japan took the lead with 10 seconds left in the first quarter, it was against the run of play. It was also their first penalty corner and Nishikori was on target.

The second quarter was all Japan, as they stretched the Indian defence to the limit. Unlike the Indians who played in tight groups, the Japanese played on both flanks giving themselves space to rotate the ball. The second goal from Japan was a classic example of excellent poaching. Mie Nakashima had the ball off a cross from the left and she hoodwinked the Indian defence with a lovely deflection. The Indian goalkeeper didn’t have a clue. From the Indian standpoint, it was a soft goal. But Japan was 2-0 up.

India needed something special in the third and fourth quarters to quell the tide. Considering they weren’t finding their rhythm, it would be a tall task. But within 30 seconds of the restart, India were on the attack again and had their first penalty corner of the Olympic Hockey match.

Sometimes, unusual methods are required to change the tempo of a match, and India did so by bringing back a shot we thought was long forgotten. Rampal, with all the time in the world, took a step forward and hit a straight shot that beat the goalkeeper; it was Rani Rampal’s 88th international goal, and it came off a straight hit. The scores were now 1-2.

India wasted their second penalty corner, but soon earned a third. This was a period where they were pushing aggressively through the centre, inducing chaos in the Japanese defence. The third penalty corner was weak, but the raised ball was taken on the glove by Japanese goalkeeper Asano Sakiyo. But the defence failed to clear the ball and Minz smashed it tennis style into the goal. Japan went for the referral, but video umpire Lisa Roach gave the goal to India.

With the equaliser in, the match was alive once again. The fourth quarter proved to be a tense affair; the counter-attacks kept the fans and defenders on their feet. Both coaches chose to gamble at this point — Japan’s Yuji Nagai chose to go all out first. There were times when there were as many as seven Japanese players trying to breach the Indian defence. But Savita Punia had a good match.

Having soaked up the pressure until that point, India had the best chance of the Olympic Hockey match in the final minute, but Vandana Katariya had a good clean look at goal before Sakiyo saved her shot.

Neither coach would complain too much about the final scoreline, but with bigger matches coming up, both teams would need to improve their standards. The Indian women’s team has secured the ‘Olympian’ tag, and it is now time to ensure they qualify for the quarter-finals.