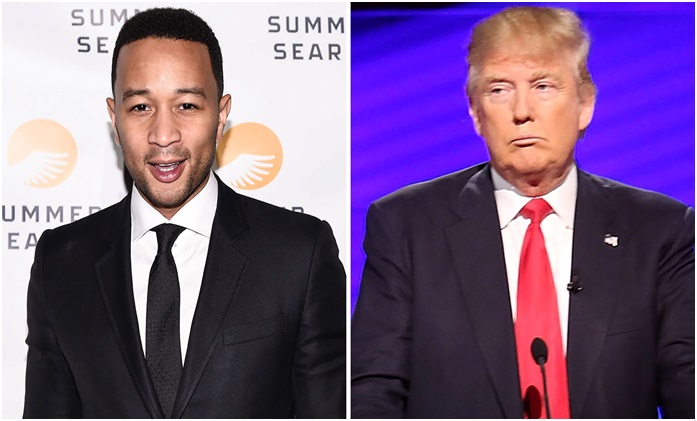 Singer John Legend wasn’t in the mood to listen the nuisance of Donald Trump Jr., and that’s when he blasted Donald Trump as ‘Racist!’ It all started when the Republican presidential front-runner’s son, Donald Trump Jr. complained on Twitter about the protesters, who derailed his father’s Chicago rally this Friday night.

The protestors on Friday looked to shut down the GOP front-runner, Donald Trump’s Chicago rally. And, the rally was finally canceled due to the security threats. Following the cancelation news, the demonstrators were even reportedly got violent as well. But, after all this, a surprise Twitter feud appeared to have erupted from the scuffle! 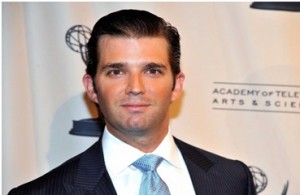 The war of words on Twitter began when Donald Trump Jr. tweeted about the protestors, mocking 5 students. He reportedly stated that the protesters were unsure as to why they all were demonstrating in the first place!

He tweeted, ‘Ha 5 students when asked why they were protesting couldn’t even answer. The participation medal/micro aggression generation is pretty sad!’

But for Grammy award winner Legend, their motivation was pretty much clear. He slammed Donald Trump Jr. by his tweet, ‘I think they were protesting your racist father. This isn’t complicated.’

Replying to this, Legend tweeted, ‘The Donalds and I graduated from the same University, funny enough.’ 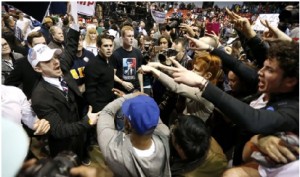 What the protesters actually did?

The demonstrators at the University of Illinois on Friday night included a mix of activists. Out of them, some demonstrators have clearly shown their support for the Democratic candidate, Bernie Sanders; while some others aligned themselves with Black Lives Matter movement. Also, some protesters were also seen shouting ‘Muslims are American’, thereby clearly referencing Donald Trump’s proposed ban on Muslims entering the country!

Meanwhile, his competitors Ted Cruz and Marco Rubio also pointed the finger at Donald Trump because of the enflaming rhetoric he has used at past rallies!