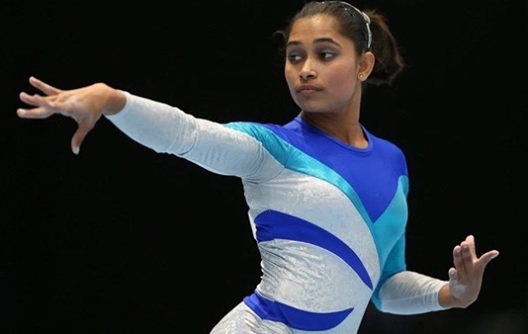 Every time Dipa Karmakar goes airborne, she puts her most valuable asset at risk for the sake of individual glory and a nation’s pride: her life.

Her life and death gamble tells us a story of a brave girl who would rather go for broke than lead a life of anonymity in spite of heavy odds, lack of money and facilities.

Since most of us look at sports through a cricket-lens, let me explain Dipa’s daring act with an analogy: Imagine her as a batsman facing Jeff Thomson – considered by many as the fastest bowler of all time – without any protective gear, standing half-way down the pitch. And the bowler is allowed to target her skull.

If Dipa Karmakar  misses, she pays a heavy price. Her vault isn’t a leap of faith, it is like jumping from an aircraft without a parachute, hoping to land safely on her feet on a piece of mat.

But, on Sunday morning, the 22-year-old from Tripura lived to fight another day when she became the first Indian to qualify for the Individual vault finals in Gymnastics.

Dipa’s achievement is huge. No Indian woman before her had qualified for a Gymnastics event at the Olympics. But now, Dipa Karmakar has a chance to win a medal at Rio.

Dipa Karmakar landed her ‘Produnova’ perfectly enough to emerge among the top eight. She will now strive to make her ‘vault of death’ better on 14 August, hoping for a podium finish.

The vault, named after Russian athlete Yelena Produnova, who tried it first in 1999, is so risky that only four other gymnasts have tried it since. When a gymnast tries this vault, she does a front spring with her hands, completes two somersaults in-flight and then tries to land on her feet.

The manoeuvre is risky because the impact on the body while landing almost doubles due to the acceleration generated by the somersaults. (Remember Force=Mass x Acceleration?) So, a gymnast needs extremely strong legs to land on his or her feet.

Also, the chances of landing on the back or the neck – if the flips are not completed – are high. And, if that happens, paralysis or instant death is a huge possibility. So risky is the Produnova that calls for banning it have been steadily rising.

US gymnast Simone Biles, considered as the best in the game today, said that someone could get killed trying to pull it off. Biles said that she would not even dream of trying it.

Just a day before Dipa’s event, French gymnast Samir Ait Said landed on his feet after his vault and his tibia and fibula snapped immediately, making his leg limp, almost lifelessly, below the knee. The sound of cracking bones was so loud that it burst out like a pistol shot through the arena. And Said was attempting one of the safest vaults. Compared to Said’s landing, Dipa’s is, as an American sports scientist argued, like coming down with the force of a ton of bricks.

While Dipa almost pulls off the vault, she is still nowhere close to its pioneer, who would stand straight on landing. In comparison, Dipa Karmakar’s landing is called a ‘butt grazer’ because she almost sits down on the mat before standing up in a swift motion.

But, her Produnova is much better than that of many other gymnasts, who have tried it in recent times. When Egyptian gymnast Fadwa Mohammad tries it, spectators have their hearts in mouth because she almost lands flat on her back, with a loud thud, before doing a quick roll to get up.

But, gymnasts still try it because it gives them a head start over competitors. The Produnova has a difficulty level of seven; other vaults are set around 5, so any athlete who lands it manages a high score. Purists argue that it is a shortcut taken by lesser gymnasts to win more points because of the risk factor, and not because of skills.

Dipa, however, argues that she has landed it hundreds of times in the past few years, making it safe for her. A combination of hard work and bravado makes her defy death every time she vaults.

But, what other option does an Indian athlete have? Dipa was born in Agartala, a North East town with negligible facilities. Her training ground would often get flooded, she had no money and, till she vaulted into limelight with her death-defying leap, nobody gave her any attention or assistance.

The Produnova gave her a shot at greatness. And she embraced it.

In many ways, Dipa’s story resembles that of child prodigy, Budhia Singh, who tried to get out of penury, misery and a life in Orissa’s ghetto by risking his life by running marathons from an early age.

Dipa is synonymous with every Indian whose quest for glory is bigger than the love for life.