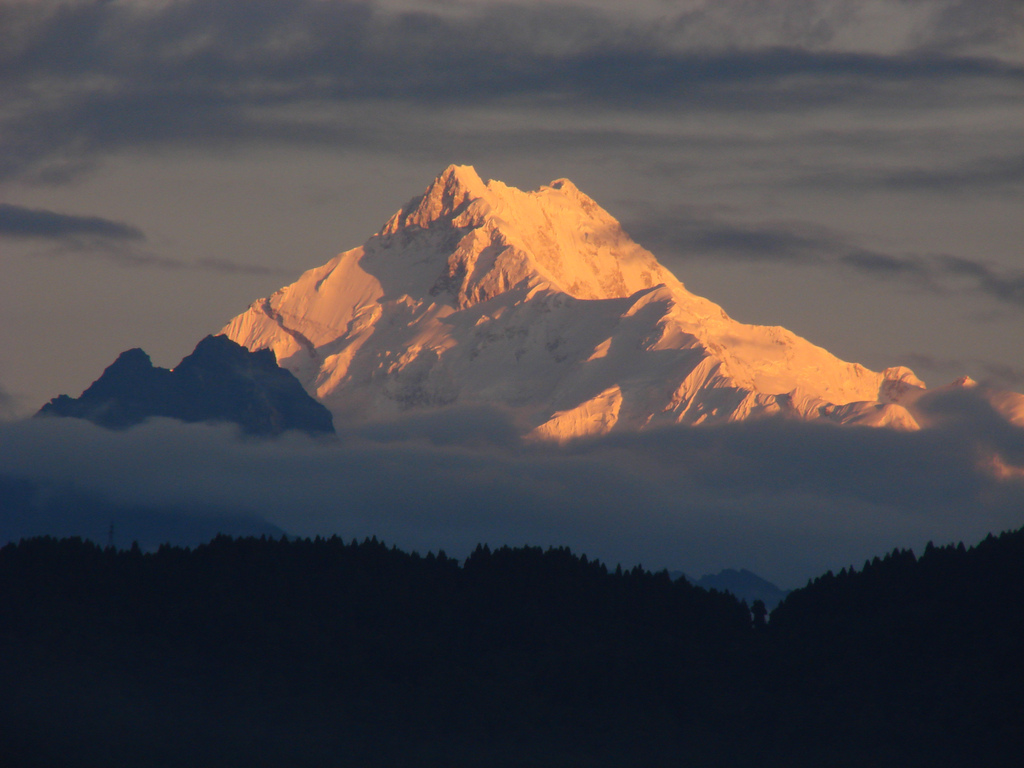 India is a home of some tallest and gallant mountain ranges in the world with most attractive sceneries and ecosystems. A term that beautifully describes the mountains, “Jewels of India”. These snow covered mountains attract many tourists from across the world for various exploration and projects. All these mountains offer a magnificently rejuvenating respite from the exhausting heat that covers almost whole of India. Here are top 10 mountains of India, which will make you go crazy to visit at least once in your lifetime.

Kanchenjunga means “Five Treasures of the Snow’ and it is the third highest peak in the world and first in India with an elevation of 8.586 meters. It can be viewed from many points of Darjeeling and Gangtok. Tiger Hills is the best spot to have a spectacular view of the mountain. The beauty is so stunning that it will last long in your mind.

Nanda Devi is the second highest mountain peak in India with an elevation of 7,824 meters. This is the highest peak in the country as Kanchenjunga lies on the border of India and Nepal. Until 1808, it was the highest known mountain when Dhaulagiri was discovered. Nanda Devi literally means ‘Blessed Goddess’. It is regarded as the pearl of the Himalayas because of its beauty. The grace full symmetry of its twin peaks, the main and the East, thrusting them up to the sky, is a visual treat, a rare example of perfect Twin Peaks.

Saltoro Kangri is known as Saltoro Range which is a part of the Karakoram. This peak is little visited because of the threat from military operations. It rises dramatically above the valleys of the Kondus and Saltoro river of Baltistan to the west of the peak. The west part is controlled by Pakistan and the east part by India.

Mt. Kamet means ‘lower snow’ attracted the first mountaineers in Tibet. It is the highest peak in Garhwal Himalayas and lies in the Chamboli District. It is 29th highest peak in the world. It is not well known, well till now, but is a great peak to visit.

Saramati is the highest in Nagaland with an elevation of 3,841 meters. It is covered with snow throughout winter.  It also has good bio-diversity in flora and fauna and various kinds of orchids.

Anamudi is the pride of Kerala and it has an elevation of 2,695 meters. Outside the Himalayan Mountain Ranges, it is the highest point in India. It is the home of largest surviving populations of Asian elephants, Gaurs and The Nilgiri’s Tahrs.

Doddabetta, is the highest mountains in the Nilgiri Hills with an elevation of 2,637 meters. It is the third highest peak in South India next to Anamudi and Meesapulimala. The Chamundi Hills can be viewed from here.

It is the highest peak of Ukhrul District with an elevation of 3,114 meters. This peak gives a complete beauty of the nature of the entire region with the flowing hills, the winding streams, undulating valleys and the colorful hamlets. It is just magical.

India consists of several famous mountains which are not included in this list. However, these mountains and peaks are worth a visit due to their breathtaking views.