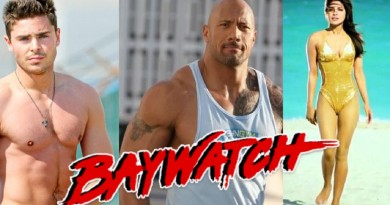 Yes, the much anticipated Hollywood movie, Baywatch, now officially has its new villain! And it’s none other than the Quantico star Priyanka Chopra. She is all set to join Dwayne ‘The Rock’ Johnson and Zac Efron in the upcoming movie ‘Baywatch’.

Priyanka Chopra is going to get bad as she is all set to make her Hollywood debut. It’s with Baywatch, which is a movie based on a hugely popular 1990s TV series. Priyanka will essay the role of a baddie in this upcoming film. This movie will star popular actors like Dwayne Johnson, Zac Efron, Kelly Rohrbach and Alexandra Daddario.

She's one of the biggest stars in the world. Insanely talented, relentlessly smokin' and extremely dangerous – perfect for #BAYWATCH. Welcome @PriyankaChopra to our bad ass and incredibly dysfunctional family. Cue RATED R slo-mo running on the beach. We start shooting next week. World.. #WelcomeToBaywatch ??????? 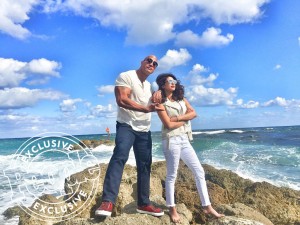 Priyanka has gained immense international popularity after she played the lead in the American TV show Quantico. She made an official announcement on Twitter and also shared pictures on the Instagram. 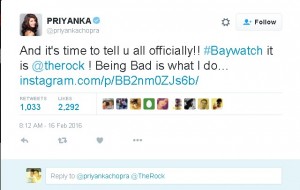 In the movie Baywatch, she will be playing the role of villainous Victoria Leeds. She made an official announcement of being bad in Baywatch. Dwayne Johnson also said in the video that Priyanka is insanely talented, relentlessly smokin’ and extremely dangerous, which makes her perfect for Baywatch. 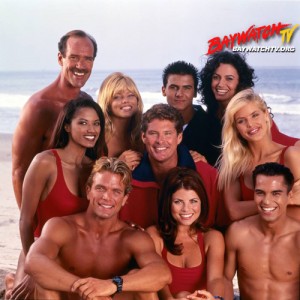 The shooting for Baywatch movie version with its cast and crew begin next week. Congratulations messages poured in for Priyanka from all over Bollywood. Let’s now wait for some more fun news from the sets of Baywatch, well until we get to see the actual movie.