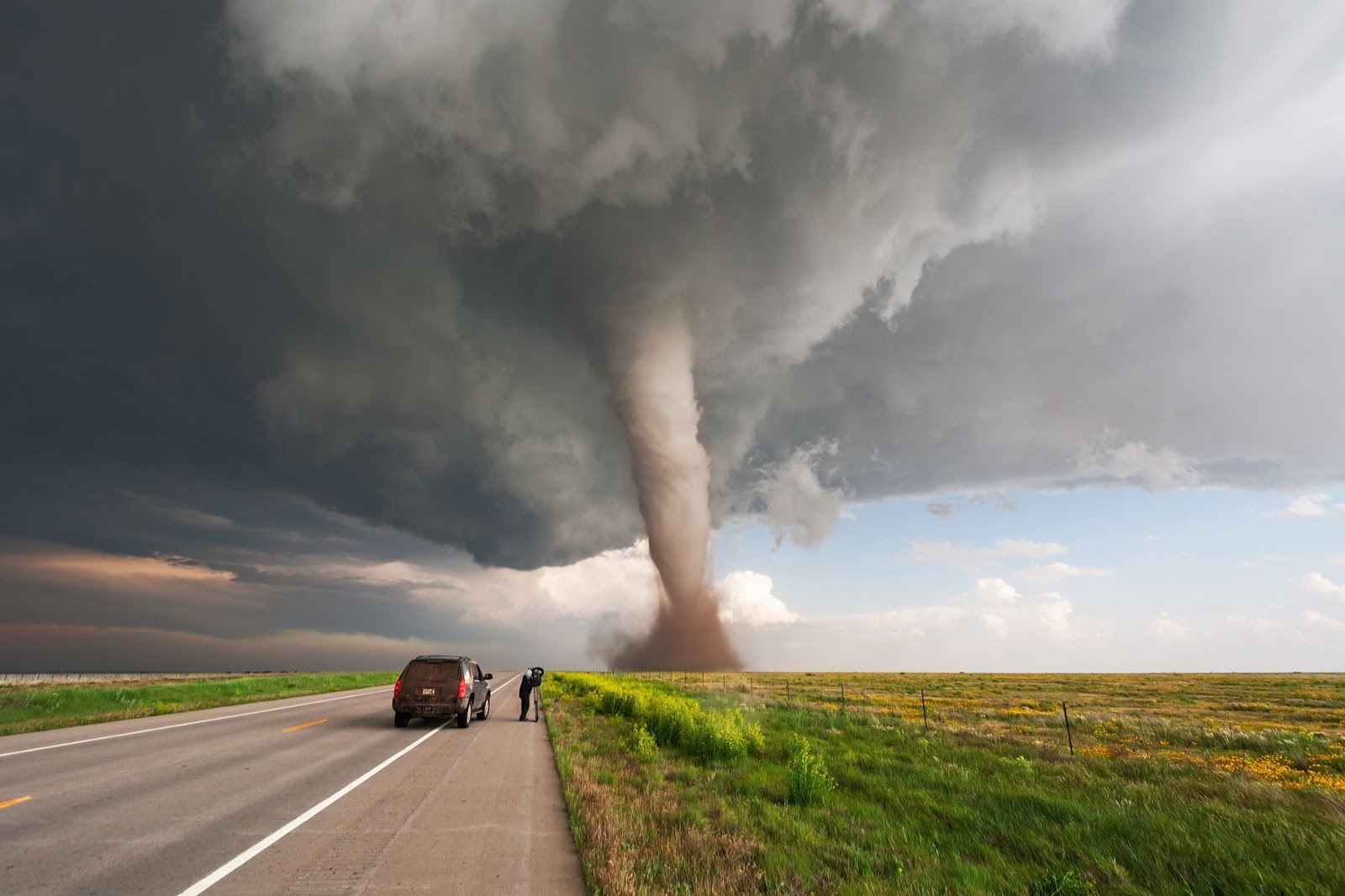 Natural Disasters are events which occurs from the natural processess of the Earth. These can results from sudden climatic change or the disturbance produced inside the Earth’s crust. These cause property damage, economic damage or even loss of life. People are trying to figure out a solution to dodge these problems but it seems that we are still very far from that approach because windstorms, earthquakes, floods, etc. are still causing many deaths and loss.

Here are 7 such natural disasters that you might wish should never occur:

Tornados are one of the most dangerous natural disasters on Earth. Tornado is a violently rotating column of air that is in contact with the Earth’s surface as well as the cumulonimbus cloud or in some cases, the base of the cumulous cloud, cumulous clouds are low-level clouds (3,300 ft.) that are fluffy in appearance and have flat bases. Tornados are often referred as Twisters or Cyclones. Most tornados have wind speeds less than 110 miles/hour and there are some extreme tornados that can attain the wind speeds of more than 300 miles/hour. Some tornados are clearly visible while others not.

Tornados are responsible for the average of 90 deaths and more than 1,500 injuries in the United States of America each year. In 1925, the tri-state tornado that hits the Illinois, Missouri and Indiana is still the deadliest tornado with the deaths over 700.

Hurricane or typhoons, cyclones, tropical storms belong to the same category of natural disaster but the names given to each depends from where they originate. In Atlantic and Northeast Pacific, hurricane is used and it is a cyclonic storm system that forms over the oceans.

The deadliest hurricane ever occurred was the Bhola Cyclone, in 1970, that struck Bangladesh (East Pakistan was before) and India’s West Bengal. More than 500,000 people lost their lives and its wind speeds was recorder 115 mph. Another was the Hurricane Katrina that devastated the Gulf Coast of the U.S. in 2005.

Earthquake is the result of the sudden release of energy in the Earth’s crust that creates seismic waves. Earthquakes come with no warning, it just happens at any moment of time. It can be violent at times and it can be not, as this depends on the seismic activity experienced by Earth’s crust.

Tsunami is caused by the displacement of a large volume of water, generally in an ocean or a lake. Earthquakes, underwater explosions, volcanic eruptions, and other disturbances, that occurs above or below water, have full potential to generate a Tsunami.

The most deadliest natural disaster was The 2004 Indian Ocean Tsunami which caused at least 230,000 people killed or missing in 14 countries bordering the Indian Oceans.

Floods are caused when a large quantity of water overflows and it submerges land and destroys everything that gets in its path. It is usually caused by when the volume of water within a water body exceeds the maximum capacity of the body.

In 2013, North India of Uttarakhand, experienced a devastating floods and landslides and is the worst natural disaster since the 2004 Tsunami, and more than 5,700 people were dead. The worst and the most deadliest floods was The Huang He (Yellow) River, China in August 1931 and approximately 1,50,000 people drowned while they sleeping.

Volcanic Eruption occur when hot materials, like lava, rocks, dust and gas compounds, are thrown out of the volcano. A volcano is a rupture in the crust of the Earth that allows hot lava, volcanic ash, and gases to escape from a magma chamber below the surface. It occurs when the crust is broken into 17 major rigid tectonic plates that float on a hotter, softer layer in its mantle.

In 1815, Indonesia witnessed the worst volcanic eruption when Mount Tambora erupted and killed over 92,000 people.

Avalanches are commonly known as snowslide or snowslip and are caused by a rapid flow of snow down a sloping surface. It occurs when the snow packed down on the surface is not able to carry its weight and slides rapidly, gathering everything that comes in its way. Rapid wind speed, major temperature changes and man-made influences can cause avalanche.

In 1970, The Huascaran Avalanche, in Peru, is considered to be the most dangerous avalanche. It was triggered by Ancash Earthquake and killed more than 20,000 people.

All these natural disasters are very horrifying and terrible by the destructions they are able to cause to human life as well as to Earth. So, let’s just hope we don’t witness more of it or just get prepared to dodge it.